AddieUp Review: Does It Really Increase Your Brain Power?

in Supplement Reviews
on August 27, 2015 by Christina Major 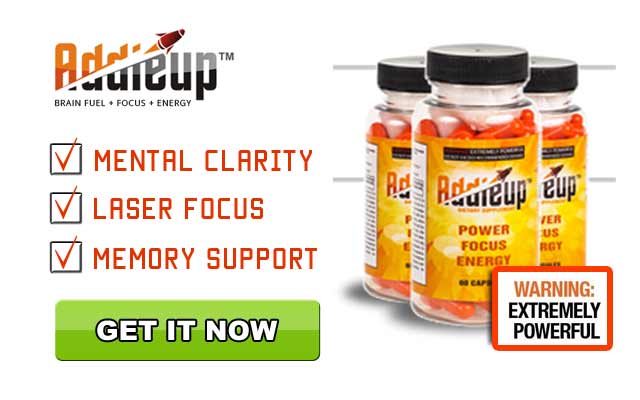 Adderall alternative AddieUp can provide high levels of focus, concentration, and energy without expensive prescriptions or illegal gambling! If you are in need of an aid to get you through the semester, that project, or presentation, you’ll find that AddieUp can give you the focus and concentration you need to make it through. 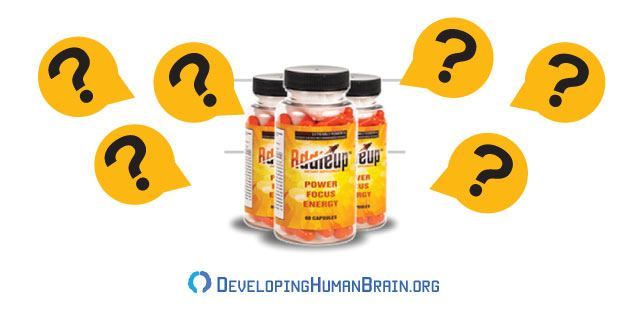 Developed by Dr. Mike Baker, DC, AddieUp is formulated to take the place of the ADHD medication Adderall, only this time using natural herbs and supplements. AddieUp provides stimulation for focus, concentration, and energy in a non-prescription formula.

After suffering with attention issues for nearly his entire life, Dr Baker struggled to avoid medications. Finally, he created AddieUp with the primary reason to solve his issues with ADHD. His high standards led to the manufacture of this nootropic for focus and concentration.

AddieUp is one of the longer running nootropics, also being one of the first ones that is still on the market.

Does Addie Up Really Work? 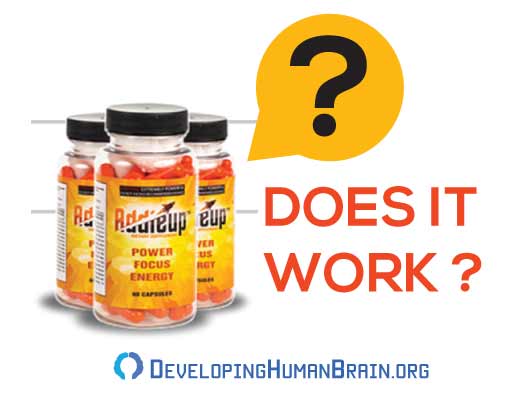 For the vast majority of people, yes, AddieUp works.

It provides the body with several natural stimulants and supporting ﻿﻿﻿vitamins﻿﻿﻿. It allows the body to work at optimal levels of efficiency and allows the brain to quiet down and filter out non-essential information.

The company keeps a high level of ethics and states it does not use any chemical fillers or gimmicks. AddieUp has a long history of use and a proven track record in sales. It is manufactured in the US and it is designed to protect the body.

The recommended dosage is 1-3 tablets per day, starting off small and working your way to higher doses. Dosing varies with most recommending to take 1 dose at a time and keep most doses during the daylight hours.

AddieUp works within 30-45 minutes of taking it and can last between 4-6 hours. They recommend you take it with at least 2 glasses of water and it can be taken with or without food. AddieUp is considered safe for long term use. 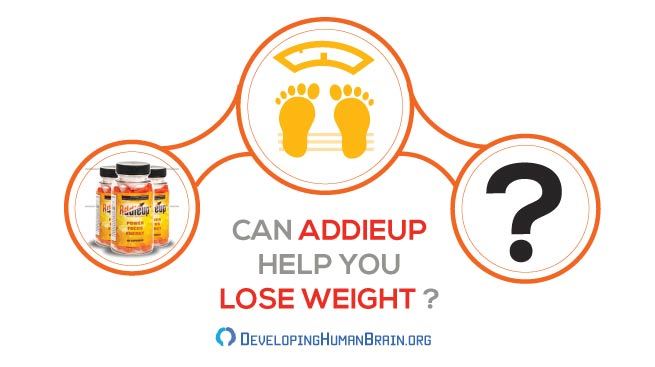 AddieUp is not a weight loss supplement. Many of the ingredients in AddieUp can result in weight loss, however higher doses that what is recommended are required to achieve the appetite suppression and increased metabolism. Many side effects are recorded at these levels. We do not recommend AddieUp for weight loss.

As part of a healthy diet and moderate exercise, AddieUp may provide energy and stamina to get through your workouts and aid in mild hunger suppression.

There are quite a few ingredients in AddieUp:

It is a natural stimulant from Africa that provides over 24 different vitamins and mineral.

It is taking the stimulant industry by storm, providing energy like sugar and caffeine, while at the same time improving our mind’s ability to concentrate.

It is the old stand-by for energy rush, and it’s also known that caffeine can ward off drowsiness and increase our brain’s ability to think faster and longer.

It  is an antioxidant that protects the brains from free radicals and helps stimulate the nerves to increase memory and concentration.

It has long been known to increase memory and attention.

It induces the body to produce acetylcholine, a powerful vitamin in the brain that helps stimulate attention and focus.

It can help stimulate the metabolism and increase energy, it also is linked to minimal weight loss in some individuals. 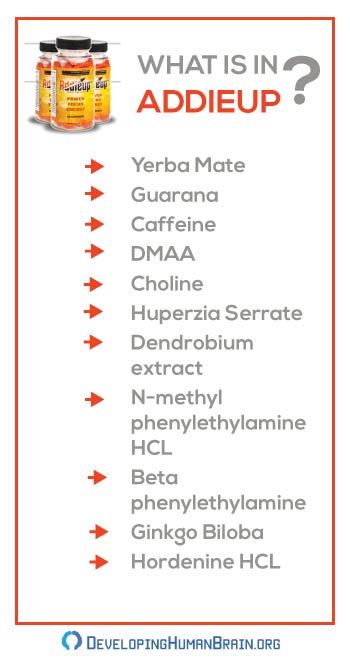 It is a natural vitamin that protects the myelin sheath around the nerves. It maintains nerve integrity and helps in building new nerve cells.

It helps the body convert energy to power and can help lower blood pressure and increase available sugars in the body (Note: this is considered a replacement for DMAA and is currently being investigated for validity claims).

It  is an energy stimulant, although people with blood pressure issues need to take heed, this can increase blood pressure and constrict blood vessels. (Note: as of 7/15/2015, all sale of products with DMAA have been halted until the DMAA has been removed – US FDA. Sales outside of the US continue.)

Like all supplements, herbs, and medications, there is someone out there that will react. With the rich composition of AddieUp, there are more than a few possible side effects.

When taken at the recommended dosage, very few people experience any side effects and no serious side effects have been reported.

The company reports you can take AddieUp with other medications, coffee, and supplements. Although they do not recommend you take AddieUp directly with coffee, but to wait a short while between.

One of the biggest drawbacks is the price. This nootropic supplement is higher prices than most of its competitors. One of the main reasons is that there is a reported higher quality standard, as professed by the company itself. It is also backed by doctors and chiropractors.

(Note: All reviews are based on products containing DMAA)

“I believe I have Adult ADHD and its quite disabling…I decided to give it a shot after seeing that it was a very natural and long term approach to solving my problems and thus wouldn’t be addictive (although I LOVE the feeling of being on it, so I am already kind of nervous to function without it)

While it wasn’t like some master key that unlocked my full potential, it made day to day life much more bearable and productive. I get way more done, with less strain, and am god darned thankful for that. I was at the end of my rope and while I still am frustrated, the depression, anxiety and stress is going away as I get more and more done and actual progress on goals”

“I heard about Addieup from another trucker at a stopover and thought it sounded peculiar…This was a good solid overall product compared to other weight loss supplements I’ve tried and what I liked is that it had some ingredients that I haven’t used before, thus negating any of that ‘tolerant’ or ‘used to’ effect I get with stimulants. I drink strong coffee now and don’t quite feel anything, but with this I got that old familiar stimulated feeling”

Many other testimonials abound on the internet. Many are positive and a few are negative.

Here’s what we find from the negative category:

Even when many of these detractors were contacted, they did not respond to questions on how much they took or how long they tried it for.

In some people, it may take a few days before effects are felt. This is a good sign the body has other issues going on that need to resolved first.​

In the few reviews that said this product did not work, it seems people did not try it long enough or potent enough.​

We did say some people will experience side effects.

A surprisingly large amount of people open state they too far too much of AddieUp and experienced side effects – taking too much is not recommended for this reason.

More people in the positive category all say the same things:

Adderall is a prescription medication that is doctor approved and widely used for ADHD. AddieUp is not in the same class of medicines as Adderall and we can’t scientifically compare the two. Adderall requires a prescription, AddieUp does not.

Observationally, AddieUp provides the similar focus and concentration aids as Adderall. Some people find it to be superior, while most find it to be equal in value. Other segments of the population find it does not work as well.

We do not recommend you switch from Adderall to AddieUp without a doctor’s supervision.

AddTabz is slightly more potent than AddieUp. Both contain similar ingredients, with some being more prominent and other being slightly less. Reviews hold that AddTabz provides a faster onset time and a stronger effect than AddieUp.

AddTabz has stronger and more serious side effects. More injury has been attributed to AddTabz. AddieUp also has had no reports of withdrawal symptoms, as AddTabz has.

For people who are using nootropics for the first time, AddieUp would be better to start with. If you find that the recommended dosage for AddieUp is not enough to fulfill your needs, then switch to AddTabz.

Profiderall is a similar nootropic as AddieUp, but not nearly as potent. Many of the reported reviews show that it only helps with mild cases of focus and energy issues. AddieUp works for people with moderate focus issues.

Based on this, we recommend starting with AddieUp. If this proves too much for you, then switch down to Profiderall. Most people will find that AddieUp is more beneficial in the long run.

Alpha Brain is a powerful Adderall alternative. It is considered by some to be one of the most powerful. It acts faster and more powerfully than AddieUp. For most people Alpha Brain is too powerful.

While AddieUp did not have many side effect stories, they abound for Alpha Brain. Alpha Brain does not have the doctor backing like AddieUp. More problems have been attributed to Alpha Brain than AddieUp.

Overall, we feel that Alpha Brain is too strong for most people and that you should definitely start with AddieUp. 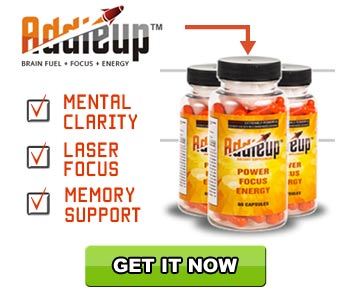 The manufacturer has a 100% money back guarantee. If you find that you are one of the people who experience side effects or if AddieUp doesn’t work for you, the manufacturer will refund your money.

AddieUp contains many ingredients known to stimulate the body and help focus and concentration. If you need this help, AddieUp is a good place to start. While there are some side effects for some people, most people have no reaction and can tolerate even high doses. We recommend starting small and working up the dosing until you reach a point where you have optimal focus with no side effects.

The vast majority of people experience positive results. They are able to focus and concentrate without an overall feeling of being forced to do it. They have more energy and feel better taking AddieUp than other supplements.

Talk to your doctor before beginning to take AddieUp to avoid any drug interactions. Do not switch from a prescription medication to AddieUp without a doctor’s supervision.

About the Author: Christina Major is a holistic nutritionist, traditional naturopath, and herbalist. She has a Master’s degree in Holistic Nutrition and an advanced degree in Traditional Naturopathy. Further certifications in herbalism and metabolic typing. She owns and operates Crystal Holistic Health Consulting based in PA, the USA since 2010.

What the * means above

Please note, that the links that have * next to them are affiliate links and those help support DevelopingHumanBrain.org website. If you decide to purchase something through those links, we will get a small commission that will help us to continue and provide new free content on this website.

For you, going through those links is the same as clicking on a direct link. You will never pay more for products as a result of clicking on our links. If anything, that can actually help you get a better price since we can sometimes negotiate better deals for our readers.

The content on our website is not affected by the affiliate products and always reflects our honest opinion. All the reviews you will find on Developinghumanbrain.org are unbiased reviews. If a product we recommend does not have a supporting affiliate program, we will still link to it, just with a standard link without the *.

I am passionate about wellness, self-improvement, productivity and mental performance.

It is my goal to motivate you and provide you with the necessary information to make the most of your brain.

I believe that knowledge is Power. And I want you to have the power to take control over your brain and your life.

What Are You Looking For?

Please log in again. The login page will open in a new tab. After logging in you can close it and return to this page.